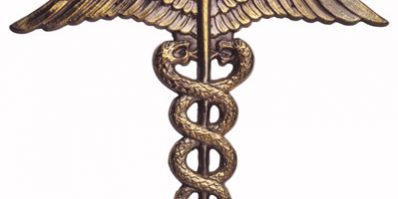 Have you been a victim of the February blahs? Well, I’m here to help you snap out of it with this informative little diversion. You see, if you simply read what I’ve had a chance to “blah” about over the last month, I can cure the bad “blahs” . That’s because I “blah, blah, blah” for a living.

Speaking of cures, in this issue I get into my scrubs and wash up before heading into the voice booth for some medical narrations; I’ll brush up the “Brit” in me pipes for the sport of kings; and I’ll introduce you to the furry imEdge Communications’ studio mascot.

Speaking of furry (well now, the segues are just flying like, well, never mind), there were reports on Groundhog Day that Canadians will witness an early spring thanks to the prognostications of one “Wiarton Willie” in Ontario. However, our friends in the U.S. get an extended winter courtesy of Pennsylvania’s “Punxsutawney Phil” being a scaredy cat disguised as a groundhog and running back into his hole.

Pictured below: The recently appointed “Toronto Teaghan”, indigenous to cozy cribs – forages through bosoms. Upon seeing her shadow we’re guaranteed at least 6 more weeks of her being absolutely adorable. 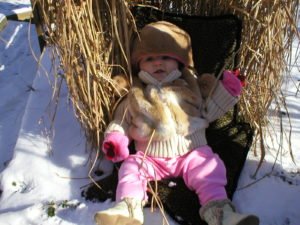 (Ed. note: I know I promised last month that I wouldn’t show another picture of my new gal until the March newsletter. But c’mon, look at her! A little dignity being compromised is worth it for mom and dad’s entertainment value)

I had the opportunity to record some voice-overs for the world famous Woodbine Race Track in Toronto as they celebrate their 50th anniversary this year. It seemed appropriate that the home of the Queen’s Plate requested that I recite my script using a British accent. In fact, they wanted two different Brit accents.

The TV commercial voice-over was to have a very subtle hint of merry ol’ England mixed in with a natural Canadian flavour. I said: “You mean like Christopher Plummer?” Exactly! After a couple of takes, by Jove, I think I got it.

The radio spot for the race track required the full-on, over-the-top Victorian thespian recitation. Somebody in the control booth yelled as a reference “Like Peter O’Toole sober”. Never happened, I replied. Regardless, I mustered up the pomp & circumstance delivery and all the production chaps seemed bleeding ducky with the results. 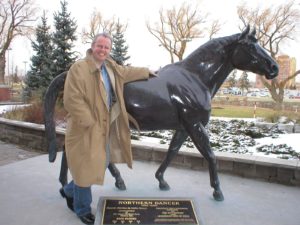 Pictured above, in front of Woodbine Race Track, I’m standing by the sculpture of Northern Dancer, a phenomenal Canadian horse that won the Kentucky Derby in a record 2 minutes in 1964. It would be nine years before a horse by the name of Secretariat would better the time.

Northern Dancer became the greatest stud horse in history, charging fees of up to one million dollars per breeding session. That’s one high priced hoofer!

The Hall of Fame Horse 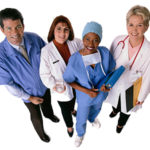 Physicians write scripts. I read them!

Medical narrations are always a challenge and not something for the faint of heart. However, a faint heart can be the result of several things. I can tell you what the problem could be. Where’s that script?

I’ve been an on-camera spokesperson and presented medical voice-overs for the likes of Pfizer, Humana Health Care, The American Headache Society, Asthma Society of Canada, Astra Zeneca and Tylenol, to name a few.

One project currently under consideration – recording up to 25,000 medical terms. Talk about your Hippocratic phonetic marathon!

“Thanks for your excellent work on the Apo Pharma narration. The video was a big hit. They loved your voice and delivery!”

“Go confidently in the direction of your dreams. Live the life you have imagined”