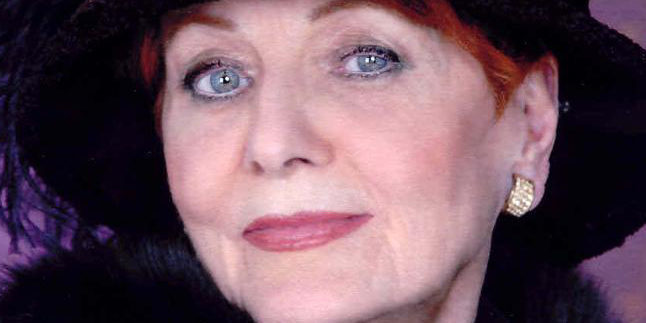 Thanks again for sparing a few minutes of your time to read my most personal newsletter.  Although on this occasion I’m not mentioning recent projects, exciting voiceover jobs or introducing new clients.  I would, however, like to share with you the reason I do what I do.  Also, on a much larger scale, the reason I am who I am.

Her name was Peggy Delaney.  No stranger to a microphone or stage, she was an actor, singer, elocution instructor, radio presenter, event producer and so much more.  She was also my mother – a magnificent woman who provided a tremendous source of inspiration, love and support who encouraged me in every sense.

A little background:  The Delaney/O’Shea family has been in communications for three generations.  Mum was one of the first female news presenters on Radio Eireann in Ireland.  Her father was one of the fastest telegraph operators for the Merchant Marine during WWI.

My mother moved to Canada in 1954 and continued her involvement in the arts with acting, singing, fashion, modeling, art, and event production.  She also provided etiquette instruction and elocution lessons on the side while working full time with extra jobs plus raising a family of four children in Toronto.

When I was 12 years old my speech on a day in the life of a 20-dollar bill, ‘I Was Born In A Mint’, took me to the national finals.  My mother attended every competition. That public speaking experience led to a talent agent and a series of 10 TV commercials ensued over the next several years.

Eventually, radio became my career path for 20 years before returning to TV and continuing to act in film and television roles.  We worked together often on live events.  She was always proud of me and would always say so.

Last October I escorted her onto the theatre stage for a gala night she was hosting.  I noticed every eye in that venue riveted to her as she spoke so eloquently.  Even in her mid 80’s I would marvel at how easily she worked a microphone with her warm Irish charm.  She quoted Yeats, acknowledged dignitaries in the audience by name, thanked sponsors and simply made every person feel that genuine and gracious welcome.

(The person most in awe must have been her cardiologist who was in attendance and had only released her from hospital less than 72 hours earlier following a mild heart attack!)

Her stage presence was magnetic.  I was so impressed standing next to her at that very moment.  I could only aspire to be as good as she was.

It still seems surreal that only two months ago she was granted a 24-hour pass from hospital, where she was undergoing abdominal tests, to raise her beloved Irish flag at Toronto City Hall in preparation for St. Patrick’s Day.  A month later Stage 4 cancer took her.

I was always proud of her.  I always will be.  And I would always tell her so.